The Women We Are Really Without 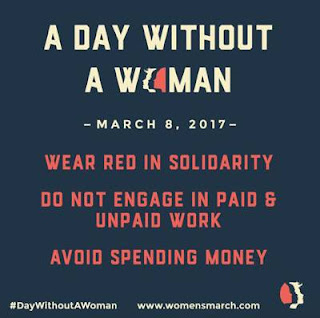 Apparently there is some sort of protest going on today under the hashtag #DayWithoutAWoman. Don't worry, the women who are going to be absent today are sadly not really going away, they are just not going to work or something for a day. Why are they taking the day off? Well I am glad you asked! Here is the scoop from www.womensmarch.com:

On International Women's Day, March 8th, women and our allies will act together for equity, justice and the human rights of women and all gender-oppressed people, through a one-day demonstration of economic solidarity.

In the same spirit of love and liberation that inspired the Women's March (my note: "spirit of love", you mean like Madonna talking about blowing up the White House?), we join together in making March 8th A Day Without a Woman, recognizing the enormous value that women of all backgrounds add to our socio-economic system--while receiving lower wages and experiencing greater inequities, vulnerability to discrimination, sexual harassment, and job insecurity. We recognize that trans and gender nonconforming people face heightened levels of discrimination, social oppression and political targeting. We believe in gender justice.

Wait, so is it a day without women or a day where women stay home or something to support sexually deviant mentally ill people? I guess they are going to wear red, because that doesn't have any historic connotations or anything and not shopping ("with exceptions for small, women- and minority-owned businesses" of course) and not doing any work. Don't worry ladies, the dirty dishes will still be there in the sink tomorrow! I am thinking about giving Amish women free rides to Wal-Mart today....

I wonder if any of the organizers of the Day Without Women gave any thought to the women we are really without today?

Since the legal perversion that gave us "the right to abortion", Roe v Wade, the abortion holocaust has claimed over 58,000,000 lives. Assuming that at least half of those were women (I would guess that sex selective abortions disproportionately target female children), that means that America is without over 29,000,000 women. Since "legal" abortions started in 1973, the earliest victims of the abortion holocaust would be in their 40's today. They would be wives and mothers, many would have careers and many others would be caring for their homes. One of those aborted women might have been less morally repulsive than Hillary Clinton and could have perhaps been the first female President. Or maybe they would just be a bunch of normal women trying to make it in this world. We will never know because they never got the chance to even draw their first breath. They were slaughtered in the one place that they should have been the safest in order to appease the goddess Choice.

The greatest injustice against women (and men and minorities and humanity itself) we have seen in the last 40 years will get no airtime from the media, no mention from virtue signaling celebrities and political activists, but we know and we don't forget. The regular people in this country know that our fellow citizens, our fellow image bearers, have been sacrificed on the blood-stained altar of feminism and no amount of marching or wearing red will undo that. We don't buy into the idea that this  "Day Without Women" has anything to do with average women. It is a leftist political stunt to provide cover for income redistribution and the normalization of perversion. It is not pro-woman, it is anti-male, anti-family, anti-children and really anti-women who don't bow to the altar of political correctness.

Don't be fooled. The agenda here is one of death, destruction and deviancy. It is an agenda dedicated to destroying families, destroying any sense of morality, destroying genuine femininity and destroying life. Real women will take care of their families and their homes tomorrow and not demand special recognition for it. They will go to work, they will wash dishes, they will comfort sick kids. They will sacrifice themselves for the sake of others because that is what women do. That is what makes them so indispensable to our society. Let the angry women march and be huffy about injustice. Real women will keep doing the often invisible work that helps to keep this country running and will not ask for nor expect anyone to make a big deal about it. That is just what they do, at least the ones who were lucky enough to escape the abortionist's scalpel.
Posted by Arthur Sido at 7:00 AM

With you all the way on this one!! Quite a few women who escaped the abortionist have grown to be important "real women".

Read in local paper today that "experts" say that women who stay at home are "economic burdens" on society. I would defy anyone to prove that about my wife who cared for our five children, provided home services for all of us none of which cost the taxpayers nothing, on top of that she was a willing helper on the farm in many different capacities, and after 56 years of marriage is still a homemaker!