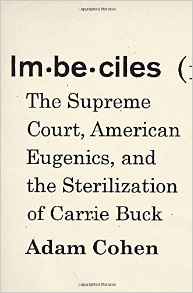 When you hear about a government using forced sterilization to eliminate "undesirable" traits in the population, your first thought would probably be that I am talking about Nazi Germany. You would be correct in that the Nazis were well know for their grotesque fascination with racial purity achieved by whatever means necessary, whether that means forced sterilizations or the outright murder of entire populations of people who had the misfortune of being born with a disability or being of a hated racial group like the Jews. What you might not realize is that when Adolf Hitler was still a young lad, eugenics was a hot topic in the land of the free and the home of the brave, even to the point of having the Supreme Court of these United States give an 8-1 decision that blessed the practice of forcibly sterilizing those deemed to be polluting the American population pool with their undesirable traits. In fact later on during the Nazi war trials after World War II, the Nazis pointed to America as leading the charge in eugenics well before the Nazis took power.

That Supreme Court decision and the simple young woman caught up in this legal precedent form the basis for a new book from Adam Cohen, Imbeciles: The Supreme Court, American Eugenics, and the Sterilization of Carrie Buck. Adam Cohen details the parallel lives of Ms. Buck, her family, the legal and scientific authorities who created the foundation of forced sterilization and the nation herself during this time. As Cohen relates, Ms. Buck was considered the perfect individual to be used as a test case for Virginia's forced sterilization law. In a case reliant upon pretty sketchy science, dubious "evidence" and an utter lack of reasonable representation for Ms. Buck, the champions of eugenics found their ideal case to appeal all the way to the Supreme Court, where it received a warm welcome and most especially from liberal legal icon Justice Oliver Wendell Holmes, Jr. While Cohen seems disheartened by a so-called "progressive" championing forced sterilization, Justice Holmes is in good company with other progressives like Planned Parenthood founder and heroine to Presidential candidate Hillary Clinton Margaret Sanger seeing many people as less than human impediments to progress, especially blacks.

Imbeciles is a deeply researched work. I can only imagine how many boxes and boxes of irrelevant documentation he had to dig through to get the information he sought. He also is a pretty decent story teller, avoiding for the most part the tendency of historical works to drift into a dry recitation of names, dates and events. Most of all, Imbeciles is a chilling reminder of the power of an unrestrained government to wreak havoc on the lives of people it is supposed to be serving. The American courts have long been responsible for dehumanizing decisions that have decreed certain types of people (blacks, the "feebleminded", unborn children) as subhuman and worthy of being controlled, repressed or outright killed. We divest ourselves of our liberty at our peril as has been demonstrated over and over again. I do wish Cohen had dealt more with the topic of forced sterilizations in America post Buck v. Bell and that he had expanded on the chilling rise of a new form of eugenics in "designer babies" and the abortion of less than desirable babies. Buck v Bell is still the law of the land even if individual states no longer practice forced sterilizations.

Cohen stumbles in a couple of places. First he tends to do a lot of hypothesizing about what someone was thinking or feeling to help fill in his case. Certainly one can infer from other evidence what is likely to be thought in a particular case by a certain person, but that doesn't pass the sniff test for a painstakingly researched historical work. I also found that he tended to repeat himself, almost verbatim, in places making me wonder if I had not already read a page before. Finally he spends far too much time trying to prove that Ms. Buck was not "feebleminded". To me, her alleged lower intelligence or mental retardation is irrelevant to whether the United States government and the various state governments should be in the business of forcing people to be sterilized. In one telling passage Cohen recounts that Ms. Buck was sent home from a family she was staying with for using one of their dishes as a chamber pot. That seems to be a behavior that a person of normal intelligence wouldn't do. Overall though this is a worthwhile read and one that should inform your decision making well beyond questions of eugenics.