Without The Cross There Is No Need For The Manger

We tend to view the Incarnation as a holiday event, what we call Christmas as a stand alone event. We like to hear choirs singing about Isaiah 9:


For to us a child is born, to us a son is given; and the government shall be upon his shoulder, and his name shall be called Wonderful Counselor, Mighty God, Everlasting Father, Prince of Peace. (Isaiah 9:6)

It is good and proper that we rejoice in the coming Messiah who would lay down His life as a substitute for so many. We need to remember what else Isaiah write about Christ, namely that He would be reviled by men and crushed by the will of the Father but all for the sake of Jesus bearing our sins in His body and making peace between God and man.


Who has believed what he has heard from us? And to whom has the arm of the LORD been revealed? For he grew up before him like a young plant, and like a root out of dry ground; he had no form or majesty that we should look at him, and no beauty that we should desire him. He was despised and rejected by men; a man of sorrows, and acquainted with grief; and as one from whom men hide their faces he was despised, and we esteemed him not. Surely he has borne our griefs and carried our sorrows; yet we esteemed him stricken, smitten by God, and afflicted. But he was pierced for our transgressions; he was crushed for our iniquities; upon him was the chastisement that brought us peace, and with his wounds we are healed. All we like sheep have gone astray; we have turned—every one—to his own way; and the LORD has laid on him the iniquity of us all. He was oppressed, and he was afflicted, yet he opened not his mouth; like a lamb that is led to the slaughter, and like a sheep that before its shearers is silent, so he opened not his mouth. By oppression and judgment he was taken away; and as for his generation, who considered that he was cut off out of the land of the living, stricken for the transgression of my people? And they made his grave with the wicked and with a rich man in his death, although he had done no violence, and there was no deceit in his mouth. Yet it was the will of the LORD to crush him; he has put him to grief; when his soul makes an offering for guilt, he shall see his offspring; he shall prolong his days; the will of the LORD shall prosper in his hand. Out of the anguish of his soul he shall see and be satisfied; by his knowledge shall the righteous one, my servant, make many to be accounted righteous, and he shall bear their iniquities. Therefore I will divide him a portion with the many, and he shall divide the spoil with the strong, because he poured out his soul to death and was numbered with the transgressors; yet he bore the sin of many, and makes intercession for the transgressors. (Isaiah 53:1-12)

The sweet babe in the manger would be the battered and bloody Son of Man hanging on a cross. Don't miss the connection that runs from Genesis to the manger to the cross. It is all connected as part of God's sovereign will for Hus creation, If Jesus had not been born of a virgin and had He not died and rose again, the Christmas story would be meaningless. 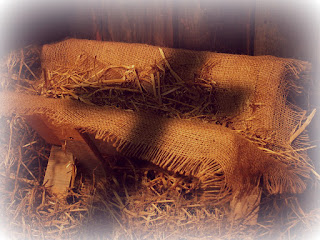 One of the things that bugs me about kids Bible story books is that they tend to reinforce the error that sees the Bible as a bunch of disconnected morality stories rather than seeing the entire Bible as a seamless whole culminating in God making a new covenant with man that is ratified in the blood of His Son and mediated by His Son who sits at the Father's right hand. It is also why I reject any sort of liturgical calendar that says we talk about the Incarnation here and the Resurrection there and the Ascension over that way. These aren't short stories collected in an anthology. They are chapters in a single story with God as the ultimate author, collected and preserved for our salvation.

Celebrate the Incarnation if you like but make sure that you do so in light of the cross because the cross and the empty tomb are the real reason for the season.
Posted by Arthur Sido at 11:00 AM

Email ThisBlogThis!Share to TwitterShare to FacebookShare to Pinterest
Labels: Christmas