The cult of child hatred

James Taranto, a secular editor for the Wall Street Journal, posted an interesting item last week as part of his popular "best of the web today" column, The War on Fertility. James was looking at an essay by Lisa Miller in the Washington Post, Romney, Santorum and archaic ideas on fertility. Apparently Ms. Miller takes umbrage that some Republican presidential candidates have large families and have the arrogance to not hide them away during the campaign. If you missed this column, you need to read it because it is equal parts fascinating look into the anti-child mindview and important lesson for believers. Here is the intro...

Between them, Mitt Romney and Rick Santorum have as many children — 12 — as there were tribes of Israel. Ron Paul has five of his own, and in an early debate, perhaps unwilling to be outdone by Michele Bachmann’s fostering of dozens, Paul boasted that when he worked as a physician he delivered “4,000 babies.”


There’s nothing wrong with big families, of course. But the smug fecundity of the Republican field this primary season has me worried. Their family photos, with members of their respective broods spilling out to the margins, seem to convey a subliminal message that goes far beyond a father’s pride in being able to field his own basketball team. What the Republican front-runners seem to be saying is this: We are like the biblical patriarchs. As conservative religious believers, we take seriously the biblical injunction to be fruitful and multiply.

Especially worrisome is the inevitable corollary to that belief: Women should put their natural fertility first — before their brains, before their ability to earn a living, before their independence — because that’s what God wants.

Gasp, there is nothing worse than a believer that...believes! It cracks me up that she has assigned a blanket, unspoken motivation that covers all of the past and present republican candidates even though that group contains a libertarian Christian man in his 70's, a much younger evangelical woman, a Roman Catholic and a mormon. She seems more put out by large, intact families than by Newt Gingrich and his serial adultery. 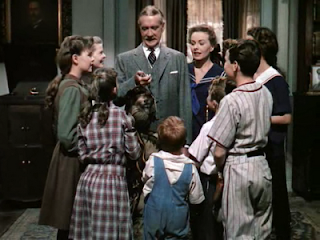 Needless to say, when she writes "There's nothing wrong with big families, of course", it is inevitable that she does think there is something very wrong with having a large family, namely that having a large family and daring to show them in public is somehow striking a blow against "women's reproductive freedom". How else to explain the "smug fecundity" of these...these....parents!

I have never, not once, heard anyone among the "Christian right" tout any of the candidates for their large family size. That doesn't mean that nobody has made that case but I haven't seen it and I certainly spend more than my fair share of time reading places where that should come up. This isn't really an issue among the "Christian right" at all as much as it is a visceral reaction among the secular Left to large families, at least large in the eyes of people in New York, D.C. and Los Angeles what qualifies as a large family. Where we live a family with five kids is not all that unusual but I can assure you that even in the Midwest large families garner a gasp and head shake response, perhaps more polite than in larger population centers but a shocked and disbelieving reaction regardless.

Although many people would classify me as intolerant because, for example, I think murdering unborn children is wrong, I don't presume to tell anyone else how many children to have. Of course I also don't presume to tell anyone how many children are enough. I think that decision is something left to each family to decide for themselves. For Christians it becomes more complex because we do have some explicit teaching from the Bible that describes children as a blessing from God which we ought to embrace rather than avoid, something that is formative rather than something to put off until the last moment. That doesn't mean that the Quiverfull folks are correct but I certainly am more sympathetic to their view than those who view children in a manner little different from the world.

That really isn't my point here. It is hardly news that "traditional" families seem to agitate people of a certain political viewpoint, especially if they are large families. Of greater concern to me, and what is sure to get some people wound up, is the way that feminism is being integrated into the church. From Taranto's post:

...why does it so bother Miller that the Romneys, Santorums and Pauls (and also the Palins, whom she mentions in another paragraph) made the choice to have large families? If she cared about choice, she would recognize it's none of her business. But contemporary feminism does not actually value choice, except as a means to an ideological end, which is the obliteration of differences between the sexes. The biggest such difference consists in the distinct and disparate demands that reproduction makes on women. Thus in order to equalize the sexes, it is necessary to discourage fertility. Implicit in contemporary feminism is a normative judgment that having children is bad.

James Taranto, an admitted unbeliever, seems to understand something that a lot of Christians are missing. Feminism is not a force for the "liberation" of women, it is a method for ideological transformation. A lot of Christian are buying into a form of feminism dressed up in Christian sounding language and in doing so are unwittingly buying into a worldview that has a goal far beyond women pastors. It is a worldview that diminishes the importance of family, replaces mothers with institutionalized childcare and ultimately denies the image-bearer understanding of humanity as unique in the world. It is lived out in the disbelieving looks large families get and the subtle insults (don't you know what causes that?) even in the church and in the burgeoning literature of neo-feminist Christians who consistently misinterpret and misrepresent Galatians 3:28.

I make no apology for sounding the warning against the influence of feminism in the church. To me it is no different than any other worldly influence, whether patriotism or materialism or environmentalism, that seeks to pervert and diminish the worldview that should be the focus of Christians. Just as patriotism conflates national identity with the church and militarism flips the peacemaking life of the disciple on its head, feminism seeks to replace the complementary and interdependent structure of the family with the radical but false independent life that reduces women to occasional baby-makers before sending them back into the work force as a unit of production. Let me be clear, women are not "liberated" by going to work outside of the home. We are living in a culture that rapidly is becoming one where staying at home, once the norm, is becoming something only the very well to do can afford (see this excellent comment on this very topic by the same columnist, James Taranto: The Unchained Woman). When staying at home with your children becomes a sort of luxury good and status symbol, who is really benefiting from feminism? Not the women who scramble all week to get their kids up, ready for school and daycare, rush to drop them off before trudging off to work only to do the same scramble in reverse at the end of the day. Certainly not the children who are raised by and large by strangers because the harried schedule of their parents and economic pressure of a two-income society reserves full-time parenting to the country club elites.

As the church we are called to look at life and the world differently, to not be carried along by every wind and whim of the culture but to hold fast to the timeless and counter-cultural teaching of Scrpture. This is true for the family more than almost any other facet of life and not surprisingly the family is often ground zero for attacks from the Enemy. Not every Christians is called or able to have a large family and having a large family is not a sure sign of theological maturity but we must be wary of worldviews that teach beliefs that run contrary to the Bible. Even if those beliefs are not overtly anti-Christian we must examine the underlying worldview of those who teach worldviews contrary to Scripture, whether in the family, in education, in the church or anywhere else. Although some honest opponents of the faith will be open about their opposition, many others utilize a more subtle influence that often is dressed in religious language and aimed at tickling our ears. We must constantly be wary and hold up every belief to the Word and the influence of the Spirit working in conjunction. Otherwise we invariably will be led astray by those who deny the Son of God. The more we look and think like the world, the less we look and think like Jesus.

Do not be conformed to this world, but be transformed by the renewal of your mind, that by testing you may discern what is the will of God, what is good and acceptable and perfect. (Romans 12:2)

You do realize we don't hate children, right? By and large, we hate breeders, not children. When we hate children, it's because their parents are imposing them on others.

Hey Francois, thanks for confirming the mindset of the acolytes of child hatred.

So you base your hatred of children on the beliefs of their parents? That certainly is a progressive worldview. It makes so much of a difference that you hate "breeders" rather than children, except of course the children of "breeders".

No, I don't hate children. I hate parents.

It sounds like you are just an unhappy person. I don't know why. Perhaps some deep seated resentment against your own parents? Regardless your anger and hatred will devour you. Turn to Christ. Only through Him will you find real peace.