Once again reading the religion section of the Huffington Post so you don't have to!

So apparently Evangelical's hate Jesus. No really, that is what a writer asserts at the Huffington Post. Think I am engaging in hyperbole? Check out the article title: Why Evangelicals Hate Jesus. See, told ya so. So why does Mr. Phil Zuckerman, a sociology professor at Pitzer College (I had to look it up to see if it was a real college) think evangelicals hate Jesus? 'Cause they aren't lib'ral enuff! Read and wonder....

Jesus unambiguously preached mercy and forgiveness. These are supposed to be cardinal virtues of the Christian faith. And yet Evangelicals are the most supportive of the death penalty, draconian sentencing, punitive punishment over rehabilitation, and the governmental use of torture. Jesus exhorted humans to be loving, peaceful, and non-violent. And yet Evangelicals are the group of Americans most supportive of easy-access weaponry, little-to-no regulation of handgun and semi-automatic gun ownership, not to mention the violent military invasion of various countries around the world. Jesus was very clear that the pursuit of wealth was inimical to the Kingdom of God, that the rich are to be condemned, and that to be a follower of Him means to give one's money to the poor. And yet Evangelicals are the most supportive of corporate greed and capitalistic excess, and they are the most opposed to institutional help for the nation's poor -- especially poor children. They hate anything that smacks of "socialism," even though that is essentially what their Savior preached. They despise food stamp programs, subsidies for schools, hospitals, job training -- anything that might dare to help out those in need. Even though helping out those in need was exactly what Jesus urged humans to do. In short, Evangelicals are that segment of America which is the most pro-militaristic, pro-gun, and pro-corporate, while simultaneously claiming to be most ardent lovers of the Prince of Peace.

Is there some truth in this? Well yes although in a misguided, confused sort of way. What is glaringly obvious is that Mr. Zuckerman makes the mistake that is the other side of the "Jesus as Republican capitalist" coin, i.e. Jesus as a hippie who would embrace gay marriage and advocate for forcible income redistribution and centralized state control over the means of production. Not to mention a Jesus who would place a woman's "right to choose" as more important than the murder of an innocent child in the womb.

Neither side is giving an accurate view of who Jesus is revealed to be. Trying to co-opt Him for crass political gamesmanship, whether by Pat Robertson or Jim Wallis, is equally disingenuous. Jesus didn't come to serve as a political slogan or to bless your football team or to give one European country the ability to smite another. He came to seek and save that which was lost.

What is too bad is that Mr. Zuckerman raises some interesting questions that evangelicals need to face. Why do we seek for success and riches when those things have no place in the Kingdom? Why do we rightly fight for life for the unborn but turn around and beat the drums of war at the command of our country? Why do so many Evangelicals live lives of relative luxury while our brothers and sisters around the world suffer and starve? Important questions but questions that deserve more than political cheap shots. Quite disappointing.

Well when you are a professor at a college with this mission statement: Pitzer College produces engaged 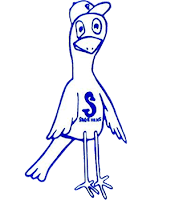 socially responsible citizens of the world through an academically rigorous, interdisciplinary liberal arts education emphasizing social justice, intercultural understanding and environmental sensitivity. and that has a "Cecil the sagehen" as a mascot, I guess you can't expect much. I just wish that people who are completely disinterested in Jesus as Lord and what He taught unambiguously about an eternal hell and the coming Judgment wouldn't try to co-opt Him as a posterboy for political liberalism. Jesus is a package deal, you take all of Him or none of Him.
Posted by Arthur Sido at 5:58 PM