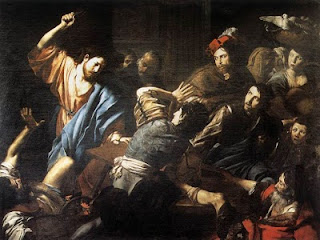 The Passover of the Jews was at hand, and Jesus went up to Jerusalem. In the temple he found those who were selling oxen and sheep and pigeons, and the money-changers sitting there. And making a whip of cords, he drove them all out of the temple, with the sheep and oxen. And he poured out the coins of the money-changers and overturned their tables. And he told those who sold the pigeons, “Take these things away; do not make my Father's house a house of trade.” His disciples remembered that it was written, “Zeal for your house will consume me.” (John 2: 13-17)

In one of the most important events in the Gospels leading up to the cross, Jesus enters the temple in Jerusalem and causes quite a ruckus when He overturns the tables of the moneychangers, makes a whip and drives out those who had turned the temple into a place of commerce. In doing so, He declared both His displeasure at what was going on and His authority to overturn a practice that was at least tolerated by the religious leaders. I was thinking a lot about that event last weekend and what it means (or should mean) for us.

I think we tend to gloss over this event because we, on this side of the cross, understand who Jesus is and why He had every right to do what He did in the temple. I am not sure in our modern sensibilities that we can even begin to understand how dramatic this was. Maybe someone going into the Vatican and publicly calling out the Pope? I am not sure even that would measure up, the Swiss Guards would just haul that person out and have them arrested as a kook. What Jesus did was to make a bold declaration of His divine authority over even the temple. It is difficult indeed to really understand this event in light of the current context as a reader in 2011. Here is the big question this event raises for me. Was Jesus really angry at the moneychangers or was His anger directed at what they represented? I believe it was more of what they represented, vain religion, than the men themselves.

My understanding of what was happening in the temple was that these entrepreneurial capitalists were providing a product to meet a consumer need to exchange money into local currency and buy animals for sacrifice, all in the confines of the temple making it into a one-stop shop and a relatively quick and easy process (given that travel to the temple from anywhere except Jerusalem was pretty arduous). What was on display was less worship of the Living God, the great I AM who rescued His people from Egypt and more a simple display of religion. Do what is expected of you, culturally and religiously, and do it is painlessly as possible. It wasn’t like they hadn’t been warned against the empty rituals that were commonplace in Israel (see Isaiah 1: 11- 17 and Micah 6: 6-8). God was not after simplistic obedience to a set of commands but after a people who had hearts devoted to Him. God is not interested in vain religion or rote repetition. Jesus declared His displeasure in the overturning of the tables and ultimately the temple itself, having become obsolete at the cross, was destroyed around 70 AD.

Unfortunately man loves religion. The Bible is pretty specific that in Creation itself, evidence of God is all around even unbelievers. The sense of something transcendent permeates much of what we do and seek. Even people who are devotedly secular are typically quite religious. It may be their sports team or their social pastimes or their family or their country. Whatever it is, almost everyone has something that demands their religious devotion. For most people, this religious inclination is manifested in a perversion of worship, whether worshipping an idol of our own mental making or worshipping the creation itself instead of the Creator (Rom 1: 25). This same innate sense of religious devotion and practice infects the church and has for a very long time.

So that is all lovely and such but what does that have to do with the church today? Quite simply, the church in many ways resembles the Old Covenant temple complete with religious leaders, rituals and rules. Religion by and large replaced Christian practice in an amazingly short time after the cross and very little has changed in the intervening millennia outside of a few radical and persecuted communities.

What enabled religion to replace Christianity was safety and acceptance. It didn’t take long for the innate desire for religion to take hold of Christianity. I think that, in spite of some hyperbole, Frank Viola makes a very solid case in Pagan Christianity that with the adoption (co-option?) of Christianity by Constantine and the morphing of Christianity from an outlaw, fringe religion of persecuted radicals to the partner of the state, the church lost the character, the saltiness if you will, that made Christianity a radical, world-changing faith and reduced it to just another religion. That religion was the dominant religion of the Western world for centuries and one based at least on a surface level on the Bible but it was ultimately a religion nevertheless. Roman Catholicism is the visible face of this religion and it certainly looks a lot like what Jesus was encountering: empty rituals, a special class of rulers, lots of traditions that have no basis in Scripture. That doesn’t diminish the life changing power of the Gospel but rather the disciple-making practice of the church is hampered.

When the Reformation came along, the simple Gospel of justification by faith alone in Jesus Christ alone, apart from any works of righteousness, was recovered and brought back into the forefront. The Reformers recaptured the core doctrines of Christianity but retained many of the vain practices of Roman religion and for most of the church that is precisely where we find ourselves. In 2011 we are still mired in religion with many Christians and others still seeking to fulfill our religious obligations with as little fuss and inconvenience as possible. We are, more or less, willing to give God some of our time on Sunday and we are sort of OK with turning over a couple of bucks to our religious leaders to dispense but we are singularly unwilling to give God what He has purchased: our lives.

So that is the state of Christianity today, a community of born-again believers divided into small competing camps with the Gospel so entangled in man-made religion that many people cannot distinguish between the two. The result has been an utter crippling of the disciple-making mission of the church, visible gatherings of the church that look more like theater than fellowship, false converts who think being religious and church-going saves them. We all know something is wrong but what are we to do about it?

It is time for Christians to follow Christ and overturn the tables of the money-changers.

I am not at all suggesting some sort of civil disobedience on the part of Christians, like running into the sanctuary of your local church and knocking down the deacon passing the offering plate or throwing a sledge hammer at the video screen like the Apple commercial that was a take off on George Orwell’s 1984. 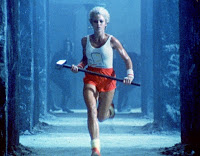 Well maybe the sledge hammer part but not the tackling the deacon part. What I am saying is that Christians need to refuse to participate in religious rituals. We need to shake the Church from Her religious stupor. We need to boldly ask questions and refuse to accept rote responses or attempts at shouting us down or intimidating us. There is a core of people who are heavily invested in “church as we know it” that respond angrily to any suggestion that something is fundamentally amiss in the church, not just in tweaking a practice here or a methodology there but the whole thing. Those of us who love the Church of Christ and desire to see Her function as God designed have no choice but to stand firm in the face of opposition, anger and mockery for the sake of His people.

The Church doesn’t belong to the churches, nor does it belong to the seminaries, or the publishing houses, or the denominations. It belongs to Christ and He and He alone is where our loyalty lies. Find a table today and kick it over. Just be prepared for the consequences. The religious people of the world hate people who stir the pot and ask questions. Of course they hated Jesus too.
Posted by Arthur Sido at 8:44 AM